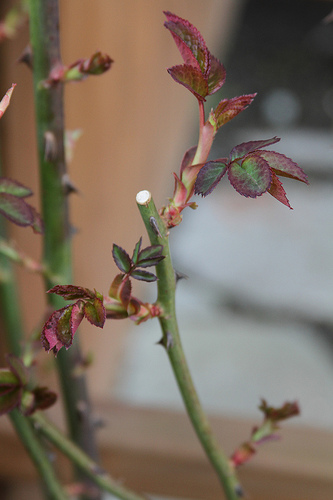 It is officially spring now and that means blooming roses are just around the corner if they haven’t started already! In order to get them ready for the coming growing season, start pruning roses now so they have time to produce new growth.

What Kind of Pruning Cut Should You Make?

When you make your cuts, do them on a 45 degree angle. If you do a steeper angle, more of the stem is exposed and it’s possible that diseases or insects could strike. Make your cuts right next to the node, which is a section where the leaves are connected to the stem. Buds are produced at these junctures. If you cut higher and leave more of the stem, it can also be a source of pests and other problems.

Making your pruning cuts near the leaf node also keeps the appearance tidier. This method can also be used later when you remove dead flowers (deadheading) as the blooming season progresses. This cleans up the rose bush and can possibly prompt it to blossom again.

How Much Do I Prune?

As a general rule, it is a good idea to prune up to one-third of a shrub at a time. Some kinds of roses like the hybrid teas can take more drastic pruning; in fact, you may want to prune out a lot on that type especially to help encourage the plant to produce fresh new stems that are long and good for putting in a vase, for example.

Study the plant before you start chopping away. Look for any parts that have died, become damaged, or are diseased. You always want to remove them for safety and the health of the plant. Once those have been taken out, look for the strongest canes (branches) on your rose bush. Use these as your foundation. Think of where they are located and make sure that you do not leave large gaps.

When do you prune your roses?

Image by words under a Flickr Creative Commons Attribution-ShareAlike License