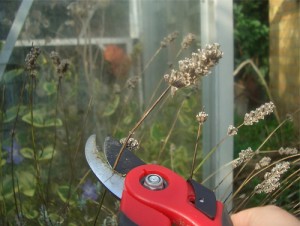 Many of the early blooming plants are done or winding down on their flowering, leaving you with dry flowerheads that are usually not as appealing. Unless it’s a plant where you are wanting the fruit to develop, you can deadhead and make your garden look better overall.

Deadheading is the process where you use a standard set of pruning shears (also called pruners, secateurs or clippers) to remove part of the stem under flowers once their life is over. This term is very commonly used in conjunction with roses, but it can be used for many of your other plants.

Some plants like the Knock Out® roses are self-cleaning, meaning that the old flowers naturally fall off and you do not need to do this process. You would also not want to do this on a fruit tree, of course, since you would be removing your entire crop.

One benefit of this practice is that you can sometimes get the plant to start flowering more. Since the flower’s job is to ultimately produce seeds and the next generation, the plant may “panic” and send out more flowers if you remove the dead blossoms and halt the reproductive process.

For roses, I suggest following the stem underneath the hip (the fruit) to the next node (joint where the leaf joins the stem) underneath and clipping it at a 45 degree angle just above this node. This will keep the plant’s appearance neater since you don’t have a bare stem sticking up. You can also have problems with insects and diseases if you simply cut it right below the hip and leave the branch. If there are a cluster of roses, choose the node underneath them all. Most other flowers can be deadheaded in a similar fashion.

Have you deadheaded your plants before? Did they bloom again?